Deep within the Pentagon, there is special place just for mad scientists and it’s called DARPA—otherwise known as the Defense Advanced Research Projects Agency. For about sixty years, this rather infamous tech branch of the U.S government has defined themselves as having one “singular and enduring mission,” to innovate breakthroughs technologies in the name of national security. And while it’s true DARPA was responsible for some of the most pivotal and mind-blowing inventions of this century, like the internet, video conferencing, Siri, and Google Earth, it’s also safe to say DARPA is home to some pretty dark and terrifying innovations as well.

During his presidency in 1958, Dwight Eisenhower founded DARPA to ensure the U.S. would continue to maximize their technological abilities above all others—cough—like the Soviet Union who had just successfully launched “Sputnik,” the world’s first artificial satellite. When Moscow lit up with celebration, the existing agency known as “ARPA” took on the letter D for Defense to ensure the Russians wouldn’t get a leg up on the U.S. military, thereby becoming DARPA. The agency then fussed with the acronym a bit, but basically it remained committed to defense.

This new mission and structure signaled “a fundamental change in America’s defense science and technology programs” and was soon expanding military frontiers in technology and science, often way, way beyond what the Army, Navy, or Air Force could actually employ.

How have they changed in the past 50 years?

Since then, DARPA has evolved into something much more than a “keep up with Joneses” tech house—it has become home to over 200 mad geniuses who are responsible for creating some of the most curious, insane, and mildly alarming inventions our our time, such as killer robots, futuristic weapons, underground sensors, cyborg insects, mind-controlled artificial limbs, flying submarines, self-repairing homes, programmable shapeshifting matter, laser-guided bullets, and cars for blind people. National security who?

But what makes DARPA particularly interesting, as if creating synthetic blood wasn’t enough, is their sizeable annual budget of $3.2 billion and their complete lack of legal accountability to—really, anyone. As a government agency, they are exempt from certain federal laws that would normally hinder them from hiring and managing personnel, which means Congress has basically green-lighted them to fund whatever projects they want, work on whatever they want, and employ whomever they want. And as a result, DARPA has produced some astounding innovations, both independently and through third parties who are able to produce results. Their approach to total domination in the tech world has three main elements:

Despite the intensity of their pursuits, DARPA has maintained a valuable sense of humor throughout the years, which often helps them to see projects and goals in unusual and deeply innovative ways. For example, they are known in the industry for their “Robotics Challenge,” which showcases how massive, expensive robots can be built to offer disaster recovery and assistance in other military or high-risk situations. But aside from those rare occasions when a mega-cyborg must save the day, they’re mostly overkill. In many “search and rescue” situations, a robot’s size is what helps them with the physical rescue—but when it comes to searching, they’re not exactly covert.

So the agency began a new program in July 2018 called SHRIMP: Short-Range Independent Microrobotic Platforms. And their goal is to “develop and demonstrate multi-functional micro-to-milli robotic platforms for use in natural and critical disaster scenarios.” Who said hero robots need to be big? They don’t. They just need to be good at what they do—and in many situations, smaller is better. 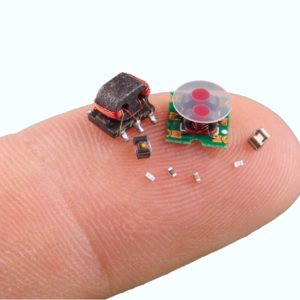 SHRIMP now supports the fundamental research needed to engineer the world’s tiniest robots, complete with mobility, actuators, and power storage. These micro-robots are not only being developed by DARPA, they are set to compete in a “series of Olympic-themed competitions” for tiny electronic devices. The competition will include a high jump, a long jump, a shotput, and a mini tug of war. So far they have spent $32 million U.S. dollars on SHRIMP, which they hope will someday offer incredible reconnaissance abilities to the military—but in the meantime, they’re certainly providing some excellent office entertainment.

Why a Digital Technology Company Should Go Global

Is Crazy Quantum Technology Messing With Your Security?