23,952,849 Blockchain wallets, that is the total estimated number of entities that engage with cryptocurrency as of the first quarter of 2018 based on the study conducted by Statistica. The growth of the use of blockchain technology was very quick, as this new trend for speculative investment has expanded from a mere 3 million wallets three years ago. If the late 90’s had the .com boom and bust, are we to continue the boom of the blockchain currency or we are at the starting line of its decline.

The success of blockchain technology as the cornerstone of cryptocurrency depends on trust, people will continue to patronize it if they feel an acceptable level of peace-of-mind. At this time this critical aspect of acceptance by the world population hangs in the balance on the backdrop of at least 5 high profile cases of cryptocurrency hacking incidents since 2013. These incidents were: the Mt. Gox Hack of 2013, Mt. Gox $473 million worth of Bitcoin robbery of 2014, The Ethereum DAO-hack of 2016, the Bitfinex hack of 2016 and the NiceHash Hack of 2017.

The question can only be answered through the careful examination of the blockchain’s foundation, its security architecture. VeChain and SlowMist have partnered in order to produce a dependable blockchain security checklist. It is now publicly accessible from their official GitHub page.

In the published documentation, the partnership emphasized hardening of the blockchain architecture through review of:

To establish these goals, a recommended General Framework has been laid-out: 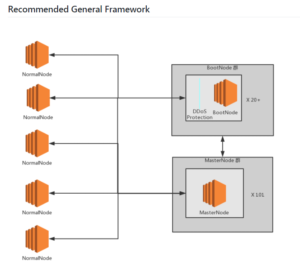 A multi-node setup of VeChain has been adapted compared to the traditional one-node setup common with blockchains of today. The new approach proposed by the GitHub page detailing all the discussion referring to this innovation is defense. The defensive strategy is fairly visible from the very beginning with a DDOS Bootnode Protection taking a big role in the whole scheme. Communication is hardened from the starting point, anticipating the existence of a possible attack, compared to the current setup adapted by various cryptocurrencies.

Sharing of expertise between many tech giants such as Alibaba, Baidu, Google, Microsoft, and WC3 is now being pursued in order to help improve the design. The importance of blockchain security as a vital non-compromising technology for today and the immediate future has been recently recognized even by the China Ministry of Public Security.

Hacking detection and prevention anchors on the capability of the system of becoming more and more auditing-friendly. SlowMist is on track of with reaching this goal, as they just recently discovered and prevented a $20 million worth of Ethereum from a piracy attack.

This Is Why Cryptocurrencies Will Always Be Unicorns

Why Cryptocurrency’s Future Needs More Women Behind The Scenes

Why Mixing Your Cryptocurrency Is Still The Best Shot At Privacy